Memorandum for Promotion of economic Cooperation of China and BiH signed 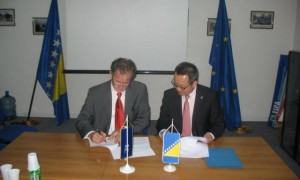 Memorandum for Promotion of economic Cooperation of China and BiH signed

Businessmen from People’s Republic of China, led by the Deputy Director of the China Chamber of International Commerce Fan Peikang, visited the Foreign Investment Promotion Agency in BiH to talk with the Director Gordan Milinic about opportunities for economic cooperation of the two countries and for investing in BiH.

In the delegation of businessmen were representatives of major Chinese companies such as CGGC International, MCC Group, PowerChina International Group, DECL, ZYNP Group, who participated in the Sarajevo Business Forum and already established contacts with several BiH companies with whom they are to launch business cooperation.

The Memorandum of Cooperation between the China Chamber of International Commerce and FIPA was signed at the meeting, with the aim of promoting economic cooperation of the two countries and potentials for investing in BiH.

Milinic thanked the Chinese businessmen for their visit and highlighted that he expects more concrete results of cooperation after the signing of the document, FIPA stated.

Peikang pointed out that he will inform the Chamber members (counting 55.000 businessmen) about the currently available projects in BiH and that he will direct them to FIPA for detailed information and contacts.